In the wake of the 911 tragedy and the creation of the of the U. S. Department of Homeland Security (DHS), the need for science-based research into the human causes and consequences of worldwide terrorism was very apparent in 2005, leading to “an initial $12 million grant from DHS to complete projects in the research areas of terrorist group formation and recruitment, terrorist group persistence and dynamics, and societal responses to terrorist threats and attacks.” As a result of this grant, the National Consortium for the Study of Terrorism and Responses to Terrorism (START) became a reality, and another grant formulated in 2008 expanded the research projects to include the areas of radicalization within terrorist recruitment, possible intervention approaches, and community resilience in the face of terrorist threats. Based geographically at the University of Maryland, the organization supports research efforts on the fundamental questions of international terrorism at more than 50 locations throughout the world. Research on the part of START is data-driven and intended to support efforts by Homeland Security policymakers and practitioners to identify and prevent terrorist attacks. START is also a strong supporter and contributor to the Global Terrorism Database (GTD).

Since its inception in 2005, the consortium has been headed by Dr. Gary LeFree, a professor of criminology who has been especially interested in the geographic concentration of terrorist attacks, motivation behind transnational violence, and factors that might increase the chances of terroristic events. Research is conducted by trained experts and directed to three primary questions:

1)      Under what conditions does an individual or a group turn to terrorism to pursue its goals? What is the nature of the radicalization process?

2)      What attack patterns have different terrorists demonstrated during the past forty years? How has terrorist behavior evolved? And, what does this indicate about likely future terrorist activity?

3)      What impact does terrorism and the threat of terrorism have on communities, and how can societies enhance their resilience to minimize the potential impacts of future attacks?

In its quest to answer these questions, START is but one of the “Centers of Excellence” organized as part of the U.S. Department of Homeland Security’s Science and Technology Directorate – and various other Federal agencies, private entities, and scholastic institutions also provide the funding that sustains its investigative efforts.  Completed research on the part of the organization is a result of individual scholarly effort, using non-classified information gathered from around the world. DHS proudly advertises that START’s “expertise in the multi-faceted nature of terrorism will continue to benefit the nation’s defense against such acts through better understanding, preparedness tactics, and security measures.”

Doctor DeFree’s interest in the geographic concentration of terrorism was very evident in a study released in early 2012. Through careful analysis of data gathered from 1970 to 2008, START was able to compare each of the 3143 counties in the United States – identifying 65 of them as “hot spots” that have experienced  a higher than average rate of terrorist attacks. Some of those counties, like Maricopa County, Arizona, have experienced increased levels of terrorism since the year 2000, whereas areas like King County, Washington have diminished in such respects over the years, although they were once considered a hot spot at one time. New York City and Los Angeles have endured steadily down through the years as areas in which terrorism is a high possibility. In the same way, the motivation and typical image of a terrorist has changed over the past 4 to 5 decades, since many attacks perpetrated in the 1970s were due to left-wing groups in Berkley, San Francisco and the surrounding areas of California – rather than Islamist groups that carry that reputation today. All research for this study was based on the basic definition of terrorism and terrorist attacks as “the threatened or actual use of illegal force and violence by a non-state actor to attain a political, economic, religious, or social goal through fear, coercion, or intimidation.” The report also categorized the “violent perpetrators” into ideological subgroups, such as left-wing, right-wing, religious, ethnonationalist, or single issue. 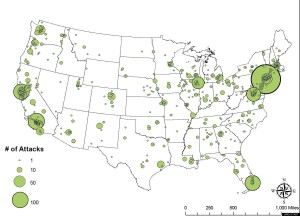 Aside from its very important role in providing insightful research on radical transnational violence, START has also taken a leading role in advanced education – on both the undergraduate and graduate levels. Located within the College of Behavioral and Social Sciences at the University of Maryland, the START undergraduate program is hard at work training the next cohort of terrorism analysts, including those students that are intent on pursuing the subject on the graduate level. The START Graduate Certificate in Terrorism Analysis, available through the University of Maryland’s Advanced Special Student Program, can be completed in twelve months and “provides participants with advanced education on the causes, dynamics, and impacts of international and domestic terrorism.” A program offering study abroad in Sydney Australia is also another facet of the educational opportunities offered by START.

Any solution to the scourge of worldwide terrorism will require efforts like those exemplified with START, which offers a multi-faceted approach to the problem. Perhaps the most beneficial aspect of  its advancements in confronting radical violence has been the pioneering steps it has taken to actually dissect, study, and define terrorism, which has surprisingly not been accomplished on the international scene – including the United Nations, where there has been a “continuing lack of agreement … on a common definition of international terrorism.” There is no question that such a clarification of the problem must become a fixture on the world stage before any hope of postulating an answer can be established. Likewise, for any recognition of that definition to be moved forward in world consciousness, there also has to be an acknowledgement of those that have died as victims, so we urge you to click on the link below and sign the petition to which this website is dedicated.

On October 2, 2001, scarcely one month after the horrors of 911, Representative Jim Turner of Texas introduced H. R. 2982 to the House of Representatives, calling for “the establishment of a memorial to victims who died as a result of terrorist acts against the United States or its people, at home or abroad.” The resolution was amended by the Committee on Resources in June of 2002 and eventually approved on September 25, 2002 on a “motion to suspend the rules and pass the bill.” It was sent to the Senate Committee on Energy and Natural Resources, but it has languished there ever since – in effect dead and going nowhere. In 2008, this Senate Committee considered making Dark Elegy, the work of a New York sculptor who lost a son in the bombing of Pan Am flight 103 over Lockerbie, Scotland, as the monument called for in H. R. 2982. However, the committee turned down the touching and thought-provoking sculptures of Suse Ellen Lowenstein – on the grounds that “…as compelling and impressive a proposal as has been made for the memorial in question, that we believe that, for the time being, that it relates to a very specific incident and should be treated as such rather than as a generic monument to victims of terrorism for all time.” Today the resolution seems forgotten, and it is the purpose of this website to promote a petition to the House of Representatives and the Senate Committee on Energy and Natural Resources, requesting that H. R. 2982 be reconsidered and revisited.
View all posts by jrcclark →
This entry was posted in Posts for the Cause and tagged monuments to victims of terrorism, National Consortium for the Study of Terrorism and Responses to Terrorism, Study of Terrorism, terrorism, United States, United States Department of Homeland Security, University of Maryland. Bookmark the permalink.