From Russia With Tears: To the Struggle Against World Terrorism

Zurab Tsereteli is a Russian artist and architect who graduated from the world famous Tbilisi State Academy of Arts in Moscow. Despite controversy that surrounded his majestic and imaginative works of art and architecture, he rose to fame in the Soviet Union after befriending the mayor of Moscow and constructing a resort for children on the shores of the Black Sea at the town of Sochi – which will host the Olympic Winter Games in 2014.  At the culminate point of his fame, Tsereteli assumed the position of Professor and President of the Russian Academy of Arts, and he has at times been rumored to be involved in the construction of a Russian Disneyland. As evident in his efforts to help children, he has always been concerned about international cooperation and world peace through the promotion of culture and art – even taking on the founding role in promoting Russian support for the United Nations Educational, Scientific and Cultural Organization (UNESCO). He has also been very aware of efforts in the United States to promote a Special Olympics for disabled children, gaining a friendship with the founder, Eunice Kennedy Shriver, in the process. By the year 2001, Tsereteli had become a resident fixture in Moscow society – rising each morning and driving to his office at the Russian Academy of Arts along Moscow streets that took him right past the U. S. Embassy. 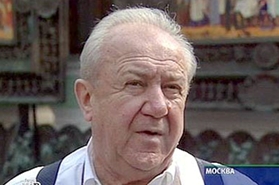 On the morning of September 2, 2001, Tsereteli  was getting ready for work when news of the attacks on the World Trade Center began to emanate from the television set he was listening to as he hurried to leave his home. Moved to tears by what he saw that day, he immediately fell back on his artistic talent to express the deep feelings that enveloped and overwhelmed him – immediately setting upon sketching designs for a monument he dubbed “To the Struggle Against World Terrorism,” perhaps better known as the Teardrop Memorial.  As he drove to work that day with thoughts of this monument on his mind, his journey took him by large crowds of Russian people who were gathered outside the U. S. Embassy – a mass of crying people trying their best to express their sympathies to the United States for what had happened. Tsereteli identified with their feelings because he was in the same emotional quandary himself. 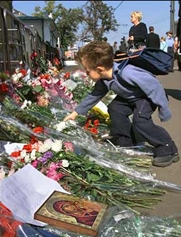 Tsereteli’s design included a cylinder rising sharply from the ground, with a huge crack in the middle – where a large teardrop would be suspended, signifying both sorrow for the events of 911 and future hope for a world free of terror. He immediately made his way to ground zero in New York, in an effort to pick the proper site for his monument – which he fully intended to send to the United States as a gift and sign of international peace. Speaking with Russians who had witnessed the horror of 911, as well as Americans that he knew, he looked carefully for a location to place his monument. Ironically, the final place of honor for his artistic achievement is a parcel of land on a former military installation in New Jersey at the town of Bayonne, which had recently re-zoned the area as a park. The area where the World Trade Center had once stood was in plain sight, but the angle of perspective had always limited the view of the center to one building. Hence, the reason Tsereteli designed his monument with only one cylinder reaching to the sky, instead of two. The symbolism in his choice seems to reach out and say “there might have been 2 towers, but my single tower represents the one world we all live in, and the obvious need for peace this tragedy represents for that world.” 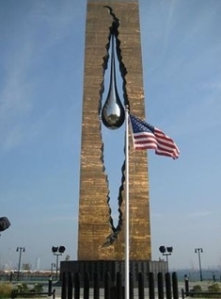 The dedication for the Teardrop Memorial came on the 5th anniversary of 911. Former President Bill Clinton delivered a moving keynote speech, and Sergei Mironov, Chairman of the Council of Federation of the Russian Federal Assembly delivered words of sympathy to the American people and reminded all present that “the entire civilized world understands that terrorism has no boundaries and nationalities; it does not depend upon skin color or creed. We have to work together in an anti terrorist coalition … the most important thing is the security of citizens of every nation on our planet.” The national anthems of both nations were played, dignitaries from both sides shook hands and chatted about world peace, and former President Clinton thanked “his friend” Zurab Tsereteli for the wonderful gift he had bestowed on the United States. For a brief sliver of a moment, the world froze in place to meditate on its problematic future – and why peace is important to guaranteeing that future.

However, there is one very puzzling footnote to this historic event: most Americans are oblivious to the very existence of Tsereteli’s “Teardrop Memorial,” or the deep implications its dedication presented concerning the future of humanity and world peace. In fact, if you have read this far in this article there is probably an 80% chance that you had never heard of Tsereteli and his monument. The startling reason for this ignorance stems from the lack of mainstream media coverage the monument and its dedication received. It was even refused by the local government of Jersey City, and you would likely be nonplused by what Wikipedia says of this monument that fostered the deepest exchange of friendship between the United States and Russia since the founder of U. S. nautical might, John Paul Jones, honed his sailing skills in the Russian Navy.

Nevertheless, there is no denying the very deep statement on terrorism the Teardrop Memorial represents. Despite nicknames, such as “the biggest 9/11 memorial you’ve never heard of,” it stands as a reminder to the tragic death of those whose names are inscribed at the base of the cylinder. There is no doubt that, left unrecognized and unchecked, terrorism stands as a deadly menace to mankind’s future. However, for at least one day this ugly menacing monster, along with lingering remnants of the Cold War itself, fell to its knees in respect for peace. Be sure to participate in the poll below and let us know what you think.

On October 2, 2001, scarcely one month after the horrors of 911, Representative Jim Turner of Texas introduced H. R. 2982 to the House of Representatives, calling for “the establishment of a memorial to victims who died as a result of terrorist acts against the United States or its people, at home or abroad.” The resolution was amended by the Committee on Resources in June of 2002 and eventually approved on September 25, 2002 on a “motion to suspend the rules and pass the bill.” It was sent to the Senate Committee on Energy and Natural Resources, but it has languished there ever since – in effect dead and going nowhere. In 2008, this Senate Committee considered making Dark Elegy, the work of a New York sculptor who lost a son in the bombing of Pan Am flight 103 over Lockerbie, Scotland, as the monument called for in H. R. 2982. However, the committee turned down the touching and thought-provoking sculptures of Suse Ellen Lowenstein – on the grounds that “…as compelling and impressive a proposal as has been made for the memorial in question, that we believe that, for the time being, that it relates to a very specific incident and should be treated as such rather than as a generic monument to victims of terrorism for all time.” Today the resolution seems forgotten, and it is the purpose of this website to promote a petition to the House of Representatives and the Senate Committee on Energy and Natural Resources, requesting that H. R. 2982 be reconsidered and revisited.
View all posts by jrcclark →
This entry was posted in Posts for the Cause and tagged 911, Architecture, Creativity, Current Events, intelligence reform and terrorism prevention act, memorrials, monuments to victims of terrorism, national pride, peace, terrorism, tsereteli, world brotherhood. Bookmark the permalink.