The Korean War Veterans Memorial: A Subject of Litigation

Ask anyone what they know about the Korean War and they will probably start off by reviewing one of their favorite episodes from the hit television series MASH, because they probably know very little more. Sandwiched between the last “good war” – also known as World War II – and the divisive 12 years the United States spent in waging the Vietnam War, the Korean War is often referred to as the “forgotten war.”  Fought from June of 1950 until July of 1953, in an effort to “contain” the advance of communism, the Korean War is not so easily forgotten by some, since it cost the lives of 54,246 American lives. Hence, when the U. S. Congress authorized the construction of a memorial in 1986, the news was long overdue in the minds of veterans that had fought in some of the most difficult terrain American GIs had ever encountered – including frigid temperatures that produced frostbite. 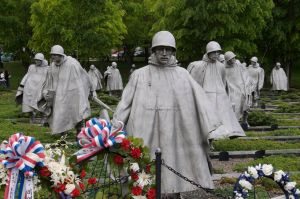 However, the monument seems to have been the subject of lawsuits from its very initiation. The contract for its construction came about through competition, which Cooper-Lecky Architects of Washington D. C. won only after a court case was filed – and lost – over design changes that the Korean War Veterans Memorial Advisory Board called for when it reviewed the project. As determined in the final design, the Korean War Veterans Memorial is in the shape of a triangle, which intersects a circle. Also included are walls made of “academy black” granite transported from the State of California, and bearing murals that portray the Korean War in images of land, sea and air combat – serving as a visual display that would make any MASH devotee proud. However, the most interesting story concerning the Korean Memorial involves the 19 larger-than-life statues that depict each branch of the military in action as a “squad” – waging the different facets of the war. The reflections of the stainless steel sculptures on the granite wall convey the impression that they are 38 in number, thereby representing the 38th Parallel that became a focal point of peace negotiations for the war – involving political dialogues that have been unsuccessful to this very day, because the Korean War has never been officially “ended” through a peace treaty.

To cast the striking statues, Cooper-Lecky Architects turned to the services of Frank Gaylord, a sculptor who had gained national recognition for the larger-than-life figures he had fashioned for commemorative and epitaphic monuments. A graduate of the Tyler School of Art at Temple University in Philadelphia, Gaylord had also served in World War II, where he had often times stopped to sketch his fellow soldiers of the 17th Airborne Division. During his fashioning of the figures for the Korean War Veterans Memorial, Gaylord turned to these drawings for the composition of the faces in his final work, which he dubbed “The Column.” Very arresting and one of the most visited monuments in Washington D. C., the Korean War Veterans Memorial received its official dedication on July 25, 1995 – in a ceremony presided over by President Bill Clinton and the President of the Republic of Korea. Compensated appropriately for his copyrighted masterpiece, Gaylord also received national recognition for his efforts and all seemed placid.

A  Marine veteran of Desert Storm and amateur photographer named John Alli changed this equable dynamic dramatically with one click of his shutter.  A camera aficionado since 1986, Alli hit upon the idea of honoring his father, who was a Korean War Veteran, with a photo of the very memorial that commemorated his days as a soldier. On a wintery day in January of 1996, Alli drove from his home in Maryland to the Korean Memorial and snapped a shot of Gaylord’s statues draped in snow, catching an eerie spirit that speaks of the sacrifice Korean War GIs gave to their country. His father was overjoyed to receive the photo as a present, but John Alli was so proud of his work he decided to enter it in a contest sponsored by the Naval Institute’s “proceedings” magazine. Alli’s snapshot, which he titled “Real Life,” won first place in the competition – and Postal Service officials offered him $1500 for the privilege of issuing a ¢37 postage stamp bearing the image. News of the stamp’s inauguration, coming in June of 2003, proclaimed it as a symbolic honor dedicated to “the 50th anniversary of the armistice that ended hostilities during the Korean War” – and the ceremony for the first issued stamp occurred at the Korean War Veterans Memorial itself. 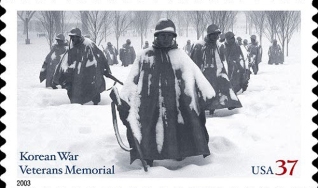 Hitting the market with instantaneous achievement, the stamp bearing Alli’s photo has brought in an estimated $30.2 million up through May of 2012. In the midst of this success, nobody thought to ask Frank Gaylord for his permission or offer one dime of compensation. Claiming copyright infringement, the sculptor filed suit against the federal government in 2006, only to be turned down by a lower court. Upon appeal, a higher court eventually sided with Gaylord, pontificating that “nature’s decision to snow cannot deprive Mr. Gaylord of an otherwise valid right to exclude.” Not to be denied his due share, Gaylord next turned his attention to monetary compensation – and a lower federal court piteously awarded him $5000. However, Gaylord countered this offer by requesting his typical 10% royalty, which would net him more than $3,000,000 based on the stamp’s marketed success. In May of 2012, he gained full recognition of this possibility from a federal judge, who relegated the decision on Gaylord’s actual monetary recompense to a lower court – to be decided at a later date.

Legal experts point out that Gaylord’s courtroom victories are landmark in proportion. Heidi E. Harvey of the Fish & Richardson law firm that represented Gaylord has said that the decision “sets a precedent for anyone — the author of software, or even a training pamphlet — whose copyrighted material was used by the government to claim a royalty if the government didn’t secure the proper rights.” Others claim that in the future all artistic contributions to national monuments will have to be declared part of the “public domain” to avoid the same legal quagmire. Don’t forget to make your opinion known by participating in our survey below.

On October 2, 2001, scarcely one month after the horrors of 911, Representative Jim Turner of Texas introduced H. R. 2982 to the House of Representatives, calling for “the establishment of a memorial to victims who died as a result of terrorist acts against the United States or its people, at home or abroad.” The resolution was amended by the Committee on Resources in June of 2002 and eventually approved on September 25, 2002 on a “motion to suspend the rules and pass the bill.” It was sent to the Senate Committee on Energy and Natural Resources, but it has languished there ever since – in effect dead and going nowhere. In 2008, this Senate Committee considered making Dark Elegy, the work of a New York sculptor who lost a son in the bombing of Pan Am flight 103 over Lockerbie, Scotland, as the monument called for in H. R. 2982. However, the committee turned down the touching and thought-provoking sculptures of Suse Ellen Lowenstein – on the grounds that “…as compelling and impressive a proposal as has been made for the memorial in question, that we believe that, for the time being, that it relates to a very specific incident and should be treated as such rather than as a generic monument to victims of terrorism for all time.” Today the resolution seems forgotten, and it is the purpose of this website to promote a petition to the House of Representatives and the Senate Committee on Energy and Natural Resources, requesting that H. R. 2982 be reconsidered and revisited.
View all posts by jrcclark →
This entry was posted in Posts for the Cause and tagged Gaylord, Korean War, Korean War Veterans Memorial, monuments to the fallen, monuments to victims of terrorism, national pride, Tyler School of Art, United States, Vietnam War, Washington DC, World War II. Bookmark the permalink.

2 Responses to The Korean War Veterans Memorial: A Subject of Litigation