Seventeen miles from Mount Rushmore in the Black Hills of South Dakota, construction on the world’s largest mountainside carving has been underway since 1948. A huge rock portrait of a great American statesman, the sculpture has nothing to do with presidents, senators, or even Washington D. C. politics in particular – but rather an honor to one of the greatest leaders to grace the history of the Sioux Nation. Originally, the idea for the gigantic rock frieze sprang from the mind of Henry Standing Bear, a Lakota Sioux elder who in 1929 wrote to sculptor Korczak Ziolkowski for the initiation of a titular image that would announce to the world that Native American leaders are every bit the equal to those in the white man’s world. When completed, the dimensions of the magnificient monument will be colossal, portraying the image of the famous chief on a horse as a “mountain-sized statue that is as long as a cruise ship and taller than a 60-story skyscraper.” A work in progress, attention has now turned from the 88-foot-high face of Crazy Horse to the head of his stallion, which will stand a whopping 219 feet high. According to estimates, completion of the entire project will come circa 2120, meaning that efforts have not even reached the halfway point in creation. Formation of such a mammoth figure is no easy task, involving a Crazy Horse Mountain Crew that employs “precision explosive engineering” to hew away at the heavy stone, which then becomes the subject of more delicate work on the finer details. 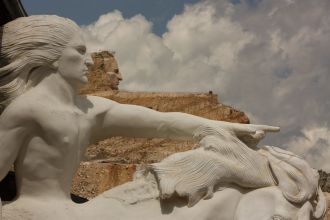 A Model of the Crazy Horse Memorial
(click for enlarged photo)

The memorial – even if it is still an effort in the making – is but one part of an educational and cultural center that will ultimately include an extension campus to the University of South Dakota, but which at present is referred to as the Indian University of North America. Since 2007, more than $7 million dollars from wealthy benefactors have poured in to benefit both the college campus and the Crazy Horse Memorial. Under the guidance of the Crazy Horse Memorial Foundation, other facets of interest include a museum, restaurant, gift shop, and conference center – making it a very comprehensive non-profit effort to foster and preserve Native American culture. Periodic editions of the Crazy Horse Progress newspaper notify donors and cohorts, who are referred to as the “Grass Roots Club,” of progress to the monument and other efforts promoted by the foundation. Fundraising goals first announced in 2006 came to fruition on the 29th anniversary of Korczak Ziolkowski’s death, when the memorial announced  on October 21, 2011 that philanthropist T. Denny Sanford had matched the $5 million raised through other smaller donations. With enough money in the bank to finish the massive horse upon which Crazy Horse is seated, one might think that serenity characterized the world of the Sioux– but such is not the case. 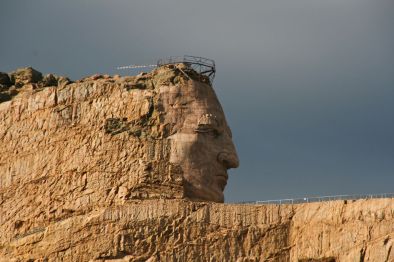 Probably born in 1840, Crazy Horse spent his adult life fighting the white man’s encroachment of the Black Hills, which the Lakota and other bands of the Sioux considered sacred. In 1876, his leadership proved crucial in the annihilation of the U. S. 7th Cavalry under the command of George Armstrong Custer, who had intervened militarily after the discovery of gold in the area. The crusade of Crazy Horse to preserve the sanctity of the Black Hills in 1876 is of great relevance to many of the Sioux, who oppose the work progressing on the Crazy Horse Memorial on the same grounds they contested nearby Mount Rushmore. Simply put, in their eyes it is a violation of the same spirituality that Crazy Horse fought so valiantly to defend. Some even point out that Sioux land is held in common by the people and any approval to build the memorial should have been decided upon by the “collective” voice of the people as a whole – not by the few that hope to make money from a tourist attraction. Lame Deer, a noted Lakota Sioux medicine man has postulated “that the whole idea of making a beautiful wild mountain into a statue of him is a pollution of the landscape – it is against the spirit of Crazy Horse.”

Making matters more interesting is the elusiveness of Crazy Horse, who carried a reputation in life for avoiding photographers and portrait artists who followed the famous warrior incessantly hoping to capture his countenance for publication. Cameras of the time were very large and bulky, making any pursuit of Crazy Horse a difficult prospect – and when he enlisted the support of family members to protect him from these intrusive attempts, the result became a total lack of confirmed photos. To this day, there is only one photograph that alleges to be a true image of him, but experts dismiss this claim as bogus. This elusive nature followed Crazy Horse to the grave, because his burial spot is a complete mystery to the modern world. After leading his people back to the reservation in 1877 – the year after the Battle of the Little Bighorn – an army private tragically bayoneted and killed the thirty-six-year-old warrior. White authorities turned the body over to his parents, who secretly conducted the interment without revealing the location. Those of the Sioux Nation opposed to the Crazy Horse Memorial argue that a man so contrary to having his image captured on film would never agree to have it sprawled across the face of a mountain, and his undisclosed burial site would seem to indicate the same. 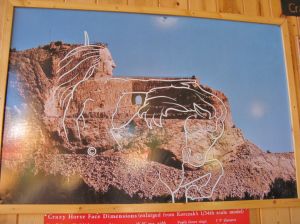 The Original Design Superimposed Against the Mountain
(click for enlarged photo)

Despite its unfinished status, the Crazy Horse Memorial attracts more than a million visitors per year, providing $1 million in scholarships toward the education of Native American students attending South Dakota schools. Events occur year round at the site of the monument’s construction, which when completed will make it the largest statue in the world – unseating a statue of Buddha in China for that honor. Controversy aside, the memorial’s success cannot be denied, but let us know what you think in the poll below. May the same persistence evident in efforts to bring the Crazy Horse Memorial to reality re-energize House Resolution 2982 and bring it to fruition in the form of a national monument dedicated to the victims of terrorism. For more information on H. R. 2982, click the link on the right side of our home page.

On October 2, 2001, scarcely one month after the horrors of 911, Representative Jim Turner of Texas introduced H. R. 2982 to the House of Representatives, calling for “the establishment of a memorial to victims who died as a result of terrorist acts against the United States or its people, at home or abroad.” The resolution was amended by the Committee on Resources in June of 2002 and eventually approved on September 25, 2002 on a “motion to suspend the rules and pass the bill.” It was sent to the Senate Committee on Energy and Natural Resources, but it has languished there ever since – in effect dead and going nowhere. In 2008, this Senate Committee considered making Dark Elegy, the work of a New York sculptor who lost a son in the bombing of Pan Am flight 103 over Lockerbie, Scotland, as the monument called for in H. R. 2982. However, the committee turned down the touching and thought-provoking sculptures of Suse Ellen Lowenstein – on the grounds that “…as compelling and impressive a proposal as has been made for the memorial in question, that we believe that, for the time being, that it relates to a very specific incident and should be treated as such rather than as a generic monument to victims of terrorism for all time.” Today the resolution seems forgotten, and it is the purpose of this website to promote a petition to the House of Representatives and the Senate Committee on Energy and Natural Resources, requesting that H. R. 2982 be reconsidered and revisited.
View all posts by jrcclark →
This entry was posted in Posts for the Cause and tagged Architecture, Battle of the Little Bighorn, Black Hills, crazy horse, Creativity, Current Events, House Resolution 2982, intelligence reform and terrorism prevention act, Korczak Ziolkowski, memorials, monuments to the fallen, monuments to victims of terrorism, mount rushmore, national pride, native american, peace, sioux, South Dakota, terrorism, terroristic violence, world brotherhood. Bookmark the permalink.

5 Responses to The Crazy Horse Memorial: Colossal and Controversial