As the United States and its allies advanced toward the eventual conquest of Japan during World War II, capturing the Pacific island of Iwo Jima stood as a critical aspect of overall strategy. Having conquered the Marianas Islands in the summer of 1944, attention turned to this tiny speck in a huge ocean in February of 1945, due to its airfields and the role it would play in the eventual fall of the Japanese homeland. Heavily fortified and tenaciously defended by the Japanese, it became the scene of a ferocious and bloody battle that took place over a 36-day period of time – extracting heavy casualties on both sides of the story. An estimated 75,000 U. S. military personnel played a role in the successful invasion of Iwo Jima, but at least 7,000 of them lost their lives before the Stars and Stripes were permanently raised over Mount Suribachi, the highest geographical prize of the conflict. The raising of that flag was the subject of a photograph that later won the Pulitzer Prize for Photography, and became the inspiration for the Marine Corps War Memorial that was dedicated in Washington D. C. on November 10, 1954. 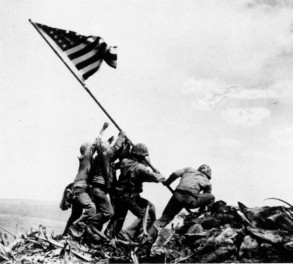 Taken by Joe Rosenthal on February 23, 1945, the award-winning photo depicts 5 U. S. Marines and 1 sailor struggling to raise the American flag over Mount Suribachi five days into the epic battle. Rosenthal, an Associated Press photographer attached to the Pacific Theater of Operations during the waning months of World War II, snapped the photo at about 1:00 PM using an iconic Speed Graphic Camera, with a lens setting between f/8 to f/11 and a shutter speed at 1/400th of a second. Tragically, three of the Marines captured at that moment by Rosenthal would not survive the Battle of Iwo Jima, whereas the other three later became celebrities and participated in a whirlwind war bond tour that raised over $26 billion. Besides the inspiration it provided for the Marine Corps Memorial, Rosenthal’s photo has also been the subject of a postage stamp –and the actual flag is preserved in the National Museum of the Marine Corps, located in Quantico, Virginia. One of the Marines raising the flag, Ira Hayes, has also been immortalized in a Johnny Cash song entitled The Ballad of Ira Hayes.

Another photographer snapped a similar photograph during another epic battle – the 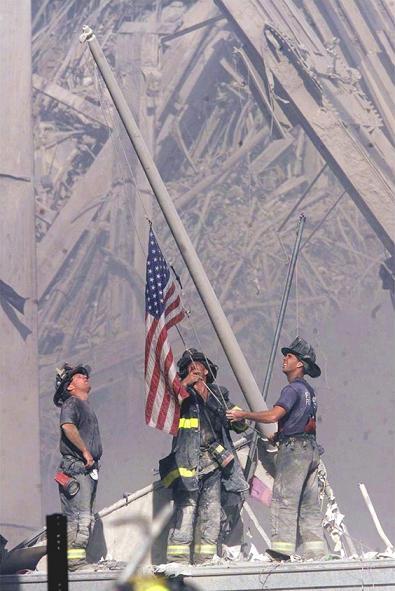 aftermath of the 911 tragedy in New York City. Entitled Ground Zero Spirit, the photo is the work of Thomas E. Franklin, a photographer for the Bergen Record with well over 20 years of professional photography experience. Taken just hours after the attacks on the World Trade Center, his photo chronicles the efforts of 3 firefighters that were raising the flag above the rubble of Ground Zero. Like Rosenthal’s photo, it became the subject of a postage stamp, raising over $10 million to benefit families and rescue workers of 911. A finalist for a Pulitzer Prize himself, Franklin later met Rosenthal on several occasions. He realized instantly at the time he shot his famous picture of the 911 aftermath that its composition would bear remarkable similarities to the Iwo Jima photo of Rosenthal.

With his photo included in a Clint Eastwood directed movie entitled Letters from Iwo Jima, Rosenthal passed away in his sleep on August 20, 2006. He was posthumously awarded the Distinguished Public Service Medal by Secretary of the Navy Donald C. Winter on September 15, 2006. As stated by Secretary Winter, there was no question Rosenthal deserved the distinction:

“For exceptionally distinguished public service in support of the United States Navy and Marine Corps. On February 23, 1945, a bespectacled Mr. Rosenthal made a picture of five U.S. Marines and one U.S. Navy corpsman that immortalized the American Fighting spirit during World War II and became an everlasting symbol of service and sacrifice, transcending art and the ages. Mr. Rosenthal’s poor eyesight prohibited him from serving in the armed services, so, he instead went to war summoning the craft he had practiced since the Great Depression. He bravely accompanied island-hopping forces in the Pacific as a civilian news photographer. On Iwo Jima, Japan, short of breath from climbing the 546-foot volcano, Mr. Rosenthal, in haste, stood on top of shaky rocks in search of the best graphic composition. As the six men hoisted an iron pole and the American flag unfurled in a smart breeze for all to see, Mr. Rosenthal captured the precise moment, unaware, until much later, of its significance. Since that very day, his iconic photo has stood as a testament to the perseverance, esprit and dedication of American Marines. In recognition of his own service and dedication, Mr. Rosenthal is posthumously awarded the Department of the Navy Distinguished Public Service Award.”

The connection between Rosenthal and Franklin transcends time and 2 different types of war. There is no doubt that the bravery of the Marines and firefighters depicted in the 2 photos are an example to us all, and such individuals should certainly be memorialized and remembered. The photos also serve as a reminder that victims of terrorism are not unlike casualties of war, and they deserve to be commemorated and memorialized through a monument – for the same reason we honor soldiers who die on the battlefield. The video below is an interview with Thomas Franklin concerning his famous photo of September 11, 2001 – but before viewing, please take a brief 5 minutes of your time and sign the petition to which this website is dedicated.

On October 2, 2001, scarcely one month after the horrors of 911, Representative Jim Turner of Texas introduced H. R. 2982 to the House of Representatives, calling for “the establishment of a memorial to victims who died as a result of terrorist acts against the United States or its people, at home or abroad.” The resolution was amended by the Committee on Resources in June of 2002 and eventually approved on September 25, 2002 on a “motion to suspend the rules and pass the bill.” It was sent to the Senate Committee on Energy and Natural Resources, but it has languished there ever since – in effect dead and going nowhere. In 2008, this Senate Committee considered making Dark Elegy, the work of a New York sculptor who lost a son in the bombing of Pan Am flight 103 over Lockerbie, Scotland, as the monument called for in H. R. 2982. However, the committee turned down the touching and thought-provoking sculptures of Suse Ellen Lowenstein – on the grounds that “…as compelling and impressive a proposal as has been made for the memorial in question, that we believe that, for the time being, that it relates to a very specific incident and should be treated as such rather than as a generic monument to victims of terrorism for all time.” Today the resolution seems forgotten, and it is the purpose of this website to promote a petition to the House of Representatives and the Senate Committee on Energy and Natural Resources, requesting that H. R. 2982 be reconsidered and revisited.
View all posts by jrcclark →
This entry was posted in Posts for the Cause and tagged intelligence reform and terrorism prevention act, Iwo Jima, joe rosenthal, Marine, memorrials, monuments to the fallen, monuments to victims of terrorism, national pride, peace, Rosenthal, thomas franklin, United States Marine Corps, Washington DC, World Trade Center, World War II. Bookmark the permalink.

1 Response to Joe Rosenthal and Thomas Franklin: Two Photos with a Patriotic Subject