A Widow’s Tale: Real Lives and the Tragedy of Terrorism

Newsrooms and news reporters too frequently convey the tragic news of those that die in acts of terror, but they have never really told the whole story. Left grossly unstated after the heartbreaking deaths of thousands of Americans have been the stories of those that live on as the survivors, struggling in the face of psychological scars – clutching their next of kin, and finding the will to live on in spite of heavy grief. This is perhaps the more significant story in any terrorist act – with no intention of implying that the person who has been cheated of life is trivial. But the courage of any one these individuals, in whatever manner they have managed to muster the internal fortitude to conquer the aftermath of terrorism, is a story perhaps best stated in a good novel. However, living in every corner of the world, they trudge through life – for the most part unnoticed and unrecognized. Survivors of those that have perished in Beirut, Lockerbie, Domodedovo, or Madrid – their stories are often epic when told, and worthy of note. With this article, we shed light on one such person – a widow whose story literally stretches across continents, numerous years and a variety of cultures.

Born and raised in the friendly and often frigid State of Michigan, June Spitler traces her roots back to the small town of Tecumseh, located just across the state line from Ohio and named after the famous leader of the Shawnee. Born in the Roaring Twenties, she is a member of perhaps the noblest and bravest generation in the history of the United States – weathering the hardships of the Great Depression, waging and winning a world war, and providing the leadership that ushered in the prosperity so many Americans take for granted at this time. June grew up in the midst of blizzards, lush fields of Michigan sweet corn, and frequent visits to her cousins in nearby Macon. A bright student, she progressed through school without trouble, graduating in Butler, Pennsylvania because the depression had briefly drawn her father there for work. However, she soon returned to her hometown and resumed her companionship with her best friend, Jane Clark – whose father had recently passed away due to heart problems. In her quest to find a husband, June did not have to look very far, since she married her best friend’s brother, Jim Clark, in the very tranquil year of 1940. As was typical for Tecumseh, Michigan, her newfound husband eventually took employment with Tecumseh Products, a manufacturing plant known worldwide as the producer of the first hermetically sealed compressor for refrigerators, as well as the world’s first window air conditioner. Returning home from church on December 7, 1941, the young couple turned on the radio to hear the shocking news that would change their lives forever and send the young housewife on a lifelong journey she had never imagined – the Japanese Empire had just bombed the U. S. Pacific Fleet as it lay anchored in Pearl Harbor, Hawaii. 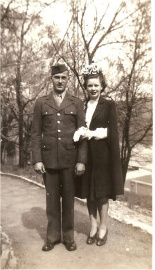 Like many young men of his generation, Jim Clark entered the military the very next day – enlisting in the U.S. Army Air Corps and eventually receiving his wings at a ceremony in Altus, Oklahoma. Throughout his training, June followed her husband – fulfilling the role of “Rosie the Riveter,” looking after their 2 young sons, growing a Victory Garden, and performing the duties of a military wife. June stood with mixed emotions as she watched her young husband receive his pilot’s wings – pride at his accomplishment and dread of the possible implications it could mean for his life. Her deepest fears were realized during the last year of the conflict, when – along with other pilots of the Army Air Corps – he received orders for duty that would almost ensure his death. With the surrender of Germany, the Roosevelt Administration turned its full attention to plans that had already been on the planning board for quite some time. Codenamed “Operation Downfall,” the ultimate assault in the Pacific called for a massive and complicated invasion of the Japanese homeland, involving hundreds of Army Air Corps pilots that would come in low over the ocean, evading Japanese radar and flying straight into the jaws of entrenched anti-aircraft fire – with intentions of bombing and strafing communication centers, factories, railroads and other locations vital to the defense of the country. The final leg of his training for this air assault on Japan brought Jim Clark to Austin, Texas, where June remembers long Sunday afternoon drives – through winding country roads – to the Stagecoach Inn in Salado, Texas. An eerie pale of dread and impending death hung over these Sunday trips, June remembers years later, “because we both knew Jim was going to die.” However, the sudden announcement of the dropping of 2 atomic bombs over Hiroshima and Nagasaki, Japan provided a reprieve for Jim Clark and thousands of other American men who would have most certainly died in a full scale invasion. In the mind of June Clark, it was one of several times that God spared the life of her husband.

As fate would have it, Jim Clark became one of the initial military personnel to “occupy” the island nation of Japan following the official surrender that occurred on September 2, 1945. With her 2 young sons in tow, June boarded a tossing and turning naval transport in 1946 and rushed to be at her husband’s side, personally witnessing the aftermath of the atomic blast over Hiroshima. During the following years, she grew to deeply appreciate the Japanese people and their culture, a fact that would be evident in her artwork decades later. To this day, June still carries a wallet-sized photo of the family maid and nanny, Osaka san, with whom she developed a deep and unforgettable friendship. When her husband chose to make a career of military service, June soon found herself bound from one military base to another – and along the way, she gave birth to 6 more children. This vagabond military life led to stops at Fairchild Air Force Base in Spokane, Washington, the Pacific island of Guam, Westover Air Force Base in Springfield, Massachusetts, and the Torrejón Strategic Air Command Base located on the outskirts of Madrid, Spain. At each step of the journey, June proudly watched her husband assume greater responsibility and higher rank. Throughout the years following their departure from Japan, Jim Clark piloted the C-47, a heavily used and highly reliable transport cargo plane – also affectionately known in the military as the “Gooney Bird.” While flying a mission from Spokane, Washington to Alaska, he once again experienced a life-threatening event when weather related engine trouble forced him to land his airplane on a frozen Canadian lake. Throughout the remaining 1940s and 1950s, June balanced the role of officer’s wife and mother as the Cold War grew increasingly more intense and nuclear warfare always seemed imminent.

On October 2, 2001, scarcely one month after the horrors of 911, Representative Jim Turner of Texas introduced H. R. 2982 to the House of Representatives, calling for “the establishment of a memorial to victims who died as a result of terrorist acts against the United States or its people, at home or abroad.” The resolution was amended by the Committee on Resources in June of 2002 and eventually approved on September 25, 2002 on a “motion to suspend the rules and pass the bill.” It was sent to the Senate Committee on Energy and Natural Resources, but it has languished there ever since – in effect dead and going nowhere. In 2008, this Senate Committee considered making Dark Elegy, the work of a New York sculptor who lost a son in the bombing of Pan Am flight 103 over Lockerbie, Scotland, as the monument called for in H. R. 2982. However, the committee turned down the touching and thought-provoking sculptures of Suse Ellen Lowenstein – on the grounds that “…as compelling and impressive a proposal as has been made for the memorial in question, that we believe that, for the time being, that it relates to a very specific incident and should be treated as such rather than as a generic monument to victims of terrorism for all time.” Today the resolution seems forgotten, and it is the purpose of this website to promote a petition to the House of Representatives and the Senate Committee on Energy and Natural Resources, requesting that H. R. 2982 be reconsidered and revisited.
View all posts by jrcclark →
This entry was posted in Posts for the Cause and tagged 1979, Architecture, chakmakli, december 14, fairchild air force base, guns and violence, human-rights, intelligence reform and terrorism prevention act, Japan, Jim Clark, June Clark, memorials, Michigan, national pride, peace, Pearl Harbor, strategic air command, terrorism, terroristic violence, torrejon air force base, turkey, turkish terrorism, United States, United States Air Force, United States Army Air Corps, videogames, westover air force base, world brotherhood. Bookmark the permalink.

1 Response to A Widow’s Tale: Real Lives and the Tragedy of Terrorism