Do you ever have the need to research terrorist activities of the past, or want information on patterns in terrorism for any given year between 1970 and 2011? If so, look no further than the Global Terrorism Database (GTD), which includes organized data on approximately 104,000 incidents of international, transnational, and domestic terror that have taken place worldwide – with the additional intention of annual updates that will be included in the future. For each incident entered in the database, the date, geographic location, weapons involved, nature of the target, and number of casualties is recorded impeccably by an online system that can be accessed by anyone who visits the website. Additionally, those responsible for the violence – whether they are an individual, terrorist cell or political entity – are included with the information that is easily available. 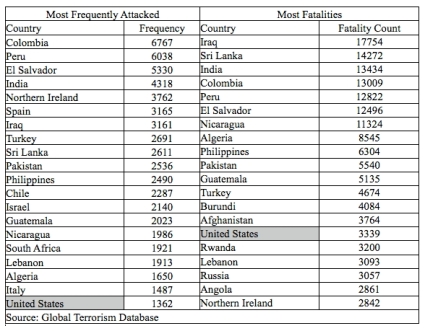 Twenty Top Ranking Countries in terms of Total Terrorist Attacks and Fatalities, 1970 to 2007

The origins of GTD can be traced back to the Pinkerton Global Intelligence Services (PGIS), which trained retired Air Force personnel from 1970 until 1997 to glean through wire reports, international newspapers, and governmental information for the purpose of gauging the threat of terrorism to the clients they served around the world. As a result of the 911 attacks on the United States, researchers from the University of Maryland obtained the database – and with funding provided by the National Institute of Justice they managed to digitize the information by very late 2005. A great deal of information for the year 1993 was lost in a corporate move by Pinkerton and has never been retrieved, leaving a gap in the data for that period of time. In April of 2006, the Department of Homeland Security provided funding that allowed for extending the record of terroristic events to the year 2007, but this additional information is notably different in the sense that the Center for Terrorism and Intelligence Studies (CETIS) utilized analysts that sifted through already documented cases of terrorism, rather than the real-time, day-by-day recording of events that had occurred through Pinkerton. CETIS also applied a new definition of terrorism to this research that had not been in place prior to 2001. GTD now includes information on over 104,000 terrorist attacks up through 2011, with incidents reported since 2007 coming in the original real-time, day-by-day tradition of Pinkerton.

The Institute for the Study of Violent Groups (ISVG), located at the University of New Haven, collected data on terrorism that took place between April of 2008 and October of 2011, thereby providing information that the University of Maryland later incorporated into the database. GTD now characterizes the database in the following terms, as mentioned at the website:

As described by GTD, “the database records up to 120 separate attributes of each incident, including approximately 75 coded variables that can be used for statistical analysis.” As each event is recorded, certain information is considered carefully as it is entered into the system, including:

Statistics garnered from the Global Terrorism Database demonstrate that attacks have quadrupled in the world since September 11, 2001. However, deaths in terrorism attacks seem to have peaked in the year 2007, at the height of the Iraq War. In the decade following the 911 tragedy, those countries most affected by terrorism were Iraq, Pakistan, Afghanistan, India and Yemen – largely due to the violent activism of Islamic extremists or the ongoing war against terrorism. As summarized by The Huffington Post, the West’s war against al-Qaeda “may have simply made matters worse – while whether they made the U.S. homeland safer was impossible to prove.”  Over the forty years included in the Global Terrorism Database, more than a third of the attacks on U. S. soil occurred in the 5 urban “hot spots” of New York, Los Angeles, Miami, San Francisco and Washington, D.C. Also ranked high by the National Consortium for the Study of Terrorism and Responses to Terrorism (START) are the cities of Chicago and Seattle. The three terrorist groups responsible for the most attacks within the U. S. homeland from 2001 to 2011 were the Earth Liberation Front (50), the Animal Liberation Front (34) and al-Qaeda (4). Worldwide, terrorists generally utilize the most readily available weapons to carry out their acts of violence: firearms and explosives. The video below is a “visualization” of the  2008 information revealed by GTD, as presented by digital artist Joao Martinho Moura. Before leaving this website, we kindly ask that you please remember to sign the petition by clicking the link below.

On October 2, 2001, scarcely one month after the horrors of 911, Representative Jim Turner of Texas introduced H. R. 2982 to the House of Representatives, calling for “the establishment of a memorial to victims who died as a result of terrorist acts against the United States or its people, at home or abroad.” The resolution was amended by the Committee on Resources in June of 2002 and eventually approved on September 25, 2002 on a “motion to suspend the rules and pass the bill.” It was sent to the Senate Committee on Energy and Natural Resources, but it has languished there ever since – in effect dead and going nowhere. In 2008, this Senate Committee considered making Dark Elegy, the work of a New York sculptor who lost a son in the bombing of Pan Am flight 103 over Lockerbie, Scotland, as the monument called for in H. R. 2982. However, the committee turned down the touching and thought-provoking sculptures of Suse Ellen Lowenstein – on the grounds that “…as compelling and impressive a proposal as has been made for the memorial in question, that we believe that, for the time being, that it relates to a very specific incident and should be treated as such rather than as a generic monument to victims of terrorism for all time.” Today the resolution seems forgotten, and it is the purpose of this website to promote a petition to the House of Representatives and the Senate Committee on Energy and Natural Resources, requesting that H. R. 2982 be reconsidered and revisited.
View all posts by jrcclark →
This entry was posted in Posts for the Cause and tagged Center for terrorism and intelligence studies, Global Terrorism Database, Institute for the study of violent groups, Iraq War, monuments to the fallen, monuments to victims of terrorism, National Consortium for the Study of Terrorism and Responses to Terrorism, National Institute of Justice, September 11 2001, terrorism, terroristic violence. Bookmark the permalink.