They Came in Peace: The Beirut Memorial

In the fall of 1983, Lebanon was notorious as one of the most violent countries in the world. The fundamental reason for this well-deserved reputation was a bloody civil war, which had prompted Israel to invade the country as part of “Operation Peace for Galilee” – a military effort intended to support the President of Lebanon, with the full blessing and overt military support of the United States. The object of this invasion was to provide a “buffer” between the various warring factions involved in the conflict, including Maronite Christians on one side and Lebanese Muslim communities on the other. Other countries had joined Israel in similar respects throughout 1982 and 1983– involving the deployment of the U. S. 32nd Marine Amphibious Unit (MAU) to Beirut as part of a joint multinational force (MNF) with France and Italy, which together had contributed 2200 troops to peacekeeping efforts in the war. Muslim adherents in the bloodshed had already come to perceive this MNF as unfairly siding with Maronite Christians, but this feeling escalated sharply when the U. S. ordered a naval bombardment of Muslim insurgents on September 19, 1983, followed by a similar French air strike on September 23. By early October, most Muslim forces failed to see the neutrality of the peacekeeping forces present in Lebanon – thereby setting the stage for one the most tragic terrorist attacks in U. S. history. 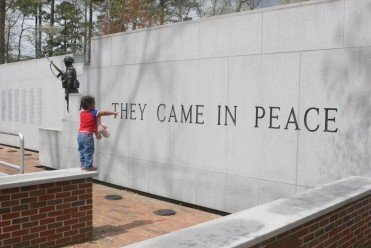 The Marines Were Part of a Peacekeeping Force
Photo credit: Someone Funny / Foter / CC BY-NC-ND

Early on the morning of October 23, 1983, the 1st Battalion 8th Marines, under the command of Lieutenant Colonel Larry Gerlach, was housed in a building located at the Beirut International Airport. A subordinate element of the 32nd Marine Amphibious Unit (MAU), much of the battalion was sleeping when a truck resembling those that delivered water to the compound drove into the parking lot, circled briefly, and then increased its speed as it crashed through a separating fence into the main building. The driver, an Iranian national named Ismael Ascari, detonated about 21,000 pounds of TNT that had been rammed into the truck – setting off an explosion that collapsed the whole building and killed 241 U. S. servicemen. Another related attack on the garrison housing the French 1st Parachute Chasseur Regiment was additionally responsible for the death of 58 elite paratroopers – making the day a very costly one for the multinational peacekeeping force.  Rescue efforts to recover survivors that were possibly buried alive underneath the rubble of the explosion went on for almost one week, involving Lebanese construction companies, medevac helicopters, and the frantic removal of debris. Approximately 128 wounded U. S. military personnel were pulled from the site, and the overall impact of the horrific event led to the withdrawal of the multinational peacekeeping force in February of 1984.

The Marine unit participating in the peacekeeping efforts that day, now re-designated as the 22nd Marine Amphibious Unit (MAU), is based out of Marine Corps Base Camp Lejeune in Jacksonville, North Carolina, where the event is memorialized by a monument. Located just outside the front gate of the military training facility there, it is the result of efforts led by the Jacksonville Beautification and Appearance Commission, which organized a design competition through the North Carolina State University School of Design. Built on 4.5 acres of land presented to the effort by Camp Lejeune itself, the monument was a community effort that involved donations from across the United States. Students at Northwoods Park Middle School in Jacksonville, taught by Mrs. Martha Warren, took it upon themselves to write letters to the families that had lost loved ones in the tragedy and raise money for the purchase of memorial trees to be planted as part of the overall monument. One ninth grade student auctioned off her Cabbage Patch Doll for $1500 dollars, and eventually one tree was planted for each lost serviceman as part of a project that was officially dedicated on March 24, 1984. The monument itself was completed 2 years later and received its official dedication on the third anniversary of the bombing in 1986.

The completed memorial is in the form of two broken walls, representing the crumbled remains of the compound after the explosion, with a pedestal in between supporting a statue depicting a Marine in a peacekeeping pose. Inscribed on the memorial are the words “They Came in Peace,” along with the names of the 273 military personnel that died as a result of the terroristic act. Although some entities have contested the claim, the United States has officially designated the destruction of the barracks as an act of terrorism, rather than an event of war. Ceremonies are held annually at the site as a commemoration, and on the 25th anniversary of the tragedy in 2011 the Gold Star Mothers – an organization of mothers that have lost a child serving in the military – placed an honorary plaque at the site. 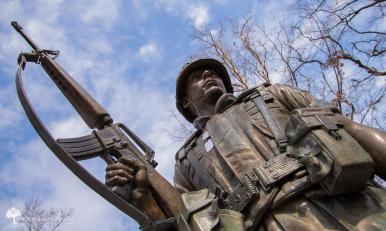 The Statue of a Marine at the Beirut Memorial
Photo credit: The Uprooted Photographer / Foter / CC BY-NC-ND

There is perhaps no other memorial that better captures the curse terrorism represents to the human race, because the bombing of the Marine barracks encapsulates all aspects of a vicious, diabolical cycle. First, religious intolerance, poverty, cultural narrow-mindedness, and racial hatred mingle with political violence – ripping the fabric of a peaceful society into shreds. Next, an outraged international community reacts through military intervention, but the long range effect is the deepening of the violent concoction already in place. In the midst of this, a new generation of terrorists is born for future attacks, which sometimes take place thousands of miles away as retaliation for a previous event in time – such as with the infamous 911 tragedy. Terrorism will never abate unless this cycle is broken, and this must begin with proactive measures. Those that have personally suffered the sting of terrorism, such as June Clark of Texas, are profoundly aware of this fact – as are the families of those that died in Beirut that day. Join us in making the whole world aware of this need by signing the petition to which this website is dedicated.

On October 2, 2001, scarcely one month after the horrors of 911, Representative Jim Turner of Texas introduced H. R. 2982 to the House of Representatives, calling for “the establishment of a memorial to victims who died as a result of terrorist acts against the United States or its people, at home or abroad.” The resolution was amended by the Committee on Resources in June of 2002 and eventually approved on September 25, 2002 on a “motion to suspend the rules and pass the bill.” It was sent to the Senate Committee on Energy and Natural Resources, but it has languished there ever since – in effect dead and going nowhere. In 2008, this Senate Committee considered making Dark Elegy, the work of a New York sculptor who lost a son in the bombing of Pan Am flight 103 over Lockerbie, Scotland, as the monument called for in H. R. 2982. However, the committee turned down the touching and thought-provoking sculptures of Suse Ellen Lowenstein – on the grounds that “…as compelling and impressive a proposal as has been made for the memorial in question, that we believe that, for the time being, that it relates to a very specific incident and should be treated as such rather than as a generic monument to victims of terrorism for all time.” Today the resolution seems forgotten, and it is the purpose of this website to promote a petition to the House of Representatives and the Senate Committee on Energy and Natural Resources, requesting that H. R. 2982 be reconsidered and revisited.
View all posts by jrcclark →
This entry was posted in Posts for the Cause and tagged 1st Battalion 8th Marines, Beirut, Lebanon, Marine, Marine Amphibious Unit, Marine Corps Base Camp Lejeune, MAU, monuments to victims of terrorism, peace, terroristic violence. Bookmark the permalink.