Dedicated to the prevention of terrorism through “education, empowerment and engagement,” the Counterterrorism Education Learning Lab (CELL) is a very unique non-profit museum and educational establishment located in Denver, Colorado. Through a combination of informational speakers, high interest exhibits and relevant training, the mission of CELL is to deliver a comprehensive explanation of terrorism, as well as the means through which private ordinary citizens can play a significant part in counterterrorism efforts and the promotion of public safety. Founded in 2008 by Larry A. Mizel, it is closely associated with the Mizel Museum – which is billed as “a dynamic journey through art, artifacts and digital media that illuminates, narrates and celebrates Jewish history and culture.” A Jewish American, Mizel has been involved with a plethora of other benevolent and community causes that earned him considerable recognition, on both the local and national stage – including the Council on Foreign Relations and the Museum of Tolerance, which has been a recipient of the Global Peace and Tolerance Award from the Friends of the United Nations. As evident in his altruistic efforts, Mizel is a proponent of peace and proactive efforts against bigotry, prejudice, terrorism and violence. 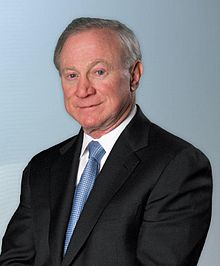 With the assistance of counterterrorism experts, as well as Academy and Emmy Award winning artists, the CELL presents an experience heavy with interactive media that is divided into 17 sections. Included in the lobby is a huge “chunk” of the World Trade Center, consisting of a large piece of melted steel marked with the inscription “S6,” thereby indicating that it likely originated from the sixth floor of the south tower before the infamous events of 911. Engaging exhibits include the tools known to be notoriously used by terrorists throughout the world, including a suicide vest, cell phone, and rocket-propelled grenade launcher. Additionally included is a darkened cinematic room entitled “Hitting Home” – for viewing videos that cover simulated terrorist attacks in the Denver area, as well as the aftermath of actual real life attacks that have taken place around the world. In yet another audiovisual area of the museum, visitors are able to view various propaganda videotapes from around the world, children’s television shows, or various electronic video games. Noises such as loud explosions and wailing sirens pervade the background atmosphere of the museum as visitors make their way through the variety of displays and presentations available for perusal.

The CELL tour concludes with a video presentation entitled “Recognizing the Eight Signs of Terrorism,” featuring National Football League Hall of Fame quarterback John Elway, who reviews the following signs – as outlined and described by WikiHow:

One blogger has described his visit to the CELL as a “dark and scary” experience that left him feeling disturbed, rather than empowered and proactive. Pointing to the much greater odds (1 in 7000) that a citizen of the United States will die in a car accident, he characterizes many of the images conveyed in the museum as fear-mongering. Given that such horrific events have actually taken place in Oklahoma City and New York City, it is difficult to justify such criticism – and those who have actually lost family members in those tragedies might take exception to such remarks. The horrific devastation of September 11, 2001 has reduced any such discussion of “odds” to a starker reality that needs to be recognized in any way possible, including the Counterterrorism Education Learning Lab. This website applauds its existence and relevance to the continued survival of humankind.

What is the largest monument in the United States? Many would argue without hesitation that Mount Rushmore holds that honor, whereas others might disagree in favor of the Gateway Arch in St. Louis, Missouri. However, such a distinction could easily be granted to a memorial laid out in hallowed ground, rather than chiseled from rock or stone. Arlington National Cemetery, covering an expanse of 624 acres in Washington D. C., is a commemoration and last resting place to more than 300,000 fallen Americans who have given their lives to their country. Although most U. S. citizens are aware of this famous memorial burial ground, the vast majority are more than likely unaware of how it came to be and where the land came from.

Now considered a symbol of national patriotism and pride, the land encompassing Arlington National Cemetery at one time belonged to the family of a man vilified as a traitor and stripped of his citizenship – namely Robert E. Lee, the famous commander of the Army of Northern Virginia during the American Civil War. However, ownership of the land can actually be traced back even further to another Virginian – who also commanded soldiers in combat and eventually assumed the highest political office of the land. George Washington, who married the widowed Martha Dandridge Custis in 1759, originally owned the land that would be handed down through the years to Mary Anna Custis, the wife of Robert E. Lee. George and Martha Washington never had children of their own, but adopted Martha’s grandchildren by her prior marriage when their father (Martha’s son), John Parke Custis, died in the Battle of Yorktown in 1781. Hence, it was the step-grandson of Washington, George Washington Parke Custis, who inherited the land and built the estate where Lee and his wife were residing at the outbreak of Civil War in 1861. At the time, the expanse of land was known as the Custis-Lee Estate. 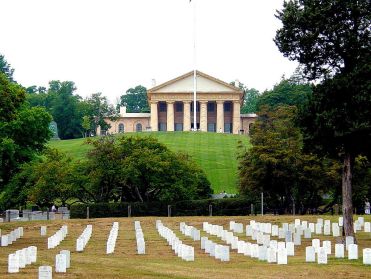 The Cemetery And The Custis-Lee Mansion
(Click For Larger Photo)

The new fate of the estate became evident immediately after the outbreak of civil war in 1861, as forces loyal to the North moved in and occupied the area, constructing defensive works against a possible assault on the capital by Southern militias. In June of 1862, a Congress devoid of political voices from secessionist states passed a law permitting the assessment and collection of taxes on property in “insurrectionary districts,” which included $92.07 levied on the Custis-Lee Estate. Mary Lee attempted to pay the tax through her cousin, but commissioners denied the attempt, confiscated the property, and eventually placed it up for auction in January of 1864. Sold to the federal government for a sum of $26,800, the property became the focal point of burials during the waning months of the war – a time that witnessed over 80,000 casualties per month. William Christman, a 21-year-old private in the 67th Pennsylvania Infantry, became the first soldier to be interred at the new burial ground when he died of peritonitis disease in Washington’s Lincoln General Hospital on May 11, 1864 – without seeing a day of combat. Officially designated a cemetery on June 15, 1864 by Secretary of War Edwin Stanton, the former home of Robert and Mary Lee also served as refuge for liberated slaves who were freed in the wake of Lincoln’s Emancipation Proclamation. Today more than 3,800 gravestones near the Marine Corps Memorial mark the burial spots of former slaves that resided at “Freedman’s Village” during and after the war.

In 1871, the initiation of an entrance gate that would finally be completed in 1879 seemed to seal the   destiny of the estate as a burial ground, despite efforts by Mary Lee to regain ownership of her former home through a petition to Congress that died in committee with meager consideration. Built by the order of Brigadier General Montgomery Cunningham Meigs, Quartermaster General of the Army between 1861 and 1882, this gate would serve as the main entrance to the cemetery until January of 1932, when President Herbert Hoover officially opened the Memorial Entrance that is now used. With the death of Robert E. Lee in 1870, followed by Mary Lee in 1873, efforts to wrestle the Custis-Lee Estate from the hands of the federal government fell to their eldest son, Custis Lee, who filed suit against the United States, claiming the property had been wrongfully confiscated. In 1882, the U. S. Supreme Court ruled in a 5-4 decision that the tax sale during the Civil War had been improper – thereby returning ownership to Custis Lee, who then sold it back to the government the very next year for a sum equivalent to over $3 million in today’s currency. General Meigs, who blamed Lee for the death of his son during the Civil War, and used the creation of the cemetery as a means of carrying out a vendetta against him, later received full burial rites in section one when he died at the age of 75 – but the Lees emerged as the real victors monetarily.

Meigs’ burial occurred in one of 70 sections that have emerged over the years since the foundation of Arlington National Cemetery, and each section has been designated for a particular purpose, such as for Confederate soldiers, former slaves, and military nurses. Erected in 1938 to honor the nurses that perished in World War I, the Nurses Memorial received a rededication in 1971 for the purpose of recognizing all nurses that served and died in the Army, Navy or Air Force. Close by the Nurses Memorial, an amphitheater has existed since 1915 – and it eventually became the home for the Tomb of the Unknowns that honors nameless soldiers that perished in World War I, World War II, Korea, and Vietnam. Undoubtedly the most popular monument in the cemetery, millions of visitors each year stop to witness the changing of the guard at the Tomb of the Unknown Soldier – a duty carried out 24 hours a day by soldiers of the 3rd United States Infantry since April 6, 1948. Occasionally referred to as the “Old Guard,” these sentinels pace 21 steps north and 21 steps south, 365 days per year, regardless of the prevailing weather.

The official website for Arlington National Cemetery lists 32 monuments and memorials that any sightseer would find interesting to visit, including the gravesite of President John F. Kennedy and the President William Howard Taft Monument. In June of 2002, the Army altered the rules that govern eligibility for burial in the nation’s most famous memorial burial ground, and stricter guidelines for the placement of new monuments now exist due to the dwindling availability of space. There are an average of 25 funerals that take place each day, including the surviving spouses and minor children of those already interred at the cemetery. Section 60 has received the most burials in recent years, since it is dedicated to those that have perished in Afghanistan and Iraq. Enjoy the video posted below if you would like, but we kindly request that you definitely click on the link below and sign the petition.