The International Network of Museums for Peace (INMP)

In 1992, thirty representatives from 10 different countries came together in Bradford, England to consider the nascent international idea of promoting peace museums. Including countries such as Australia, Japan, and the United States, the organization that sprang from this groundbreaking meeting was at first called the International Network of Peace Museums (INPM), but a later similar international conference hosted by the Gernika Peace Museum in Gernika-Lumo (Spain) in 2005 changed the name to the International Network of Museums for Peace (INMP). Over the years, several conferences for the INMP have occurred, including the eight that convened during 2014 in No Gun Ri, South Korea – which is the site of a very tragic massacre that took place during the Korean War. The list of peace museums in the world is a growing one, including approximately 60 such institutions that have sprung up around the globe, like the famous Nobel Institute in Oslo, Norway.

A Peace Bench Located Inside The Hague
Photo credit: celesteh / Foter / CC BY

INMP defines a peace museum as a nonprofit institution of education that is dedicated to propagating a culture of worldwide peace “through collecting, displaying and interpreting peace related material.” Displays or elements of a peace museum might inform the general public about non-violence and peace through the illustration of individual peacemakers in history, organizations that are dedicated to amity and goodwill in various ways, peacemaking campaigns, or historical events that exemplify the value of peace in human endeavors. Like any other museum, peace museums display objects and artifacts that would be of interest to the visitor – in this case focusing on the different people, epochs, and places important to the concept of peacebuilding in the world. Besides museums, the network of INMP also includes peace gardens, particular sites dedicated to peace, and public or community organizations dedicated to “exhibitions, documentation and similar activities.” With an overall mission of contributing to world peace through the promotion of peace museums, the organization has outlined 6 important points of dedication:

During its early years, the INMP carried out its functions informally, mostly in the capacity of occasional newsletters spaced out between the above mentioned international conferences. However, as the years progressed, the number of peace museums in the world increased rapidly, necessitating that the network take on a more formal structure of existence. It is presently governed by 10 executive board members and 12 advisory board members that represent museums of peace throughout the world. A major step occurred in 2009 when the INMP was formerly established as an association within The Hague, the international city of peace located in The Netherlands. In the year 2010, the organization opened its secretariat and official archive just a short distance from the Peace Palace that is part of that world famous municipality dedicated to international justice and peace. Far

from being an inconspicuous entity, the INMP is now registered with the United Nations as a non-governmental organization (NGO) – meaning that it is not part of a country’s government or a for-profit business. NGOs are usually entities that pursue far-reaching worldwide social interests that do not include political or governmental goals, but who often have consultative status within UN proceedings – due to the special nature of their international roles. Within its sovereign boundaries, the Netherlands has also granted the INMP status as an “institution for general benefit” (in Dutch the words are algemeen nut beogende instelling, ANBI). The office that is located in The Hague is overseen by a “secretariat administrator,” who is not to be confused with the “general coordinator” that oversees the overall functions of the INMP organization. 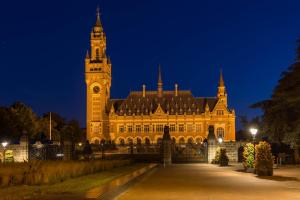 The INMP Is Located Not Far From the Peace Palace
Photo credit: jiuguangw / Foter / CC BY-SA

Located in every corner of the world, peace museums optimistically hope to put the progress of worldwide peace efforts in the “spotlight,” in the same educational manner that is employed by all museums. The INMP hopes to strengthen the growth of such institutions “in the broadest sense of the word and without any discrimination.” Such efforts are undoubtedly needed in our world, which is too often cluttered with educational institutions that take the concept of peace for granted – or for some inexplicable reason simply overlook it altogether. In order to overcome the culture of death that is so pervasive worldwide through hatred, violence, terrorism, and war, the value of peace must be studied and venerated in the same way as math, science, history, and literature. If you think deeply about it, the concept of peace museums is so crucial to the future of humanity, it is hard to understand why it took the idea so long to catch on. Why doesn’t every major city of the world have at least one of these establishments? The sponsors of this website praise the work of the INMP and ask you to help promote worldwide amity by clicking on the link below and signing the petition to which we are dedicated.

Located in the northernmost region of India, in the foothills of the Himalayan Mountains, the white dome of the Shanti Stupa can be viewed for hundreds of miles around. Glistening in the sun, it has been visual evidence of Buddhism’s keenness to the concept of world peace ever since it’s dedication in 1991 – at which time the 14th Dalai Lama personally preserved relics of the living Buddha at its base. To a great degree, construction of this monument is due to the thinking of Nichidatsu Fujii, a Japanese Buddhist monk who made the decision in 1947 to construct Peace Pagodas throughout the world, as memorials to the ideal of world peace. Shanti Stupa is considered to be one of the most striking and beautiful edifications in the world dedicated to the concept of world peace – and it is certainly one of the most highly elevated peace monuments on earth. 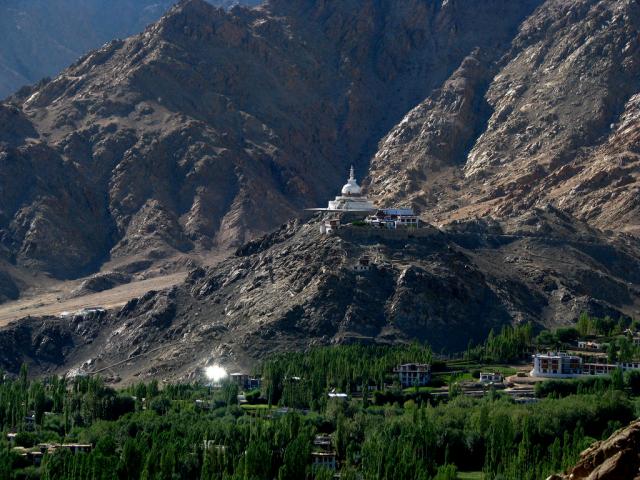 Located in the Foothills of the Himalayan Mountains, Shanti Stupa Overlooks the Indian Town of Leh
Photo credit: mckaysavage / Foter.com / CC BY

The notion of a stupa originated even before the days of Buddha, as earthen burial mounds for ascetic thinkers , who were involved in the process of extreme spiritual self-denial and austerity within the traditions of Hinduism – from which Buddhism spun sometime between the 6th and 4th centuries BCE. According to tradition, these ascetics were buried in a seated position within a chaitya, which served as a prayer hall for the devoted. Upon the death of Buddha, his remains were cremated and distributed amongst eight mounds – and the urn and embers for his cremation were buried in 2 additional mounds. In the 3rd century BCE, the Emperor Ashoka of India – who had converted to Buddhism – had the original stupas containing the remains of Buddha opened for the purpose of redistributing the ashes between thousands of other stupas he had ordered constructed throughout his kingdom. By then, stupas had evolved to include an entrance, fence-like enclosure, square raised area on top, canopy, and circular pathway around the base of the structure. Elaborations on the stupa became more and more common as the practice spread into other areas of Asia – to include the “chorten” of Tibet and the “pagoda” of East Asia.

The White Dome of Shanti Stupa Can Be Seen For Hundreds of Miles
Photo credit: Will Vousden / Foter.com / CC BY-NC-SA

Construction on the Shanti Stupa began in April of 1983, with the intention of commemorating 2500 years of Buddhism and promoting the ideal of worldwide peace and prosperity. Completion of the monument came through the allied efforts of Ladakhi Buddhists of India and the Japanese  Nipponzan-Myohoji Buddhist Order that has long venerated India as the “sacred” land of Buddha’s life and death. Indira Gandhi, who was the Prime Minister of India at the time, ordered the construction of a road to the location in 1984, which now acts as an avenue for tourists to visit the site. The Indian government provided a great deal of financial assistance for its construction, making it an effort supported by both religious and secular interests. The monument includes a photograph of the present Dalai Lama, Tenzin Gyatso, as well as a golden statue of Buddha that sits on a “turning wheel of Dharma,” reliefs of Buddha in various poses of meditation, and other artistic depictions of the life of the Buddha.

When interviewed concerning the reasons for terrorism, the Dalai Lama has noted distinctive and increasingly dangerous changes that have occurred within his lifetime. In his opinion, terrorism has become increasingly more vengeful in its motivation – involving “a mixture of politics, economics, and religion.” He has also noted the inequality of wealth in the world, which has involved the exploitation of poorer countries by the West – as they are drawn to the available natural resources, including the oil of Arab nations. In the midst of the injustices stemming from these factors, jealousies and hatred have been created and viciously mixed with religious narrow mindedness.  “When combined with lots of anger and frustration,” says the Dalai Lama, this concoction causes “a huge amount of hate.”  As countermeasures to the new face of terrorism now plaguing the world, he points to religious pluralism, tolerance, and open discussion that must pervade the interaction of human beings on our planet. If approached the wrong way, the Dalai Lama cautions that the scourge of terrorism can become an even greater worldwide problem. “While today there is one bin Laden, after a few years there will be ten bin Ladens,” he warns. “And it is possible that after a few more years, there will be 100 bin Ladens.”

Rather than through guns and war, the Dalai Lama insists that the most logical way to tackle future concerns of terrorism is through prevention. In the aftermath of 911, his issued statements to world politicians called for educational programs and the promotion of non-violence. “It is difficult to deal with terrorism through non-violence,” the exiled spiritual leader exclaims, but in the long run he also believes it will be the most effective in preventing the growth of radical violence in the world. You will find more information on Shanti Stupa in the video below, but please take a moment afterward to sign the petition to which this website is dedicated.